The Average Kitchen Size for All Types of Homes 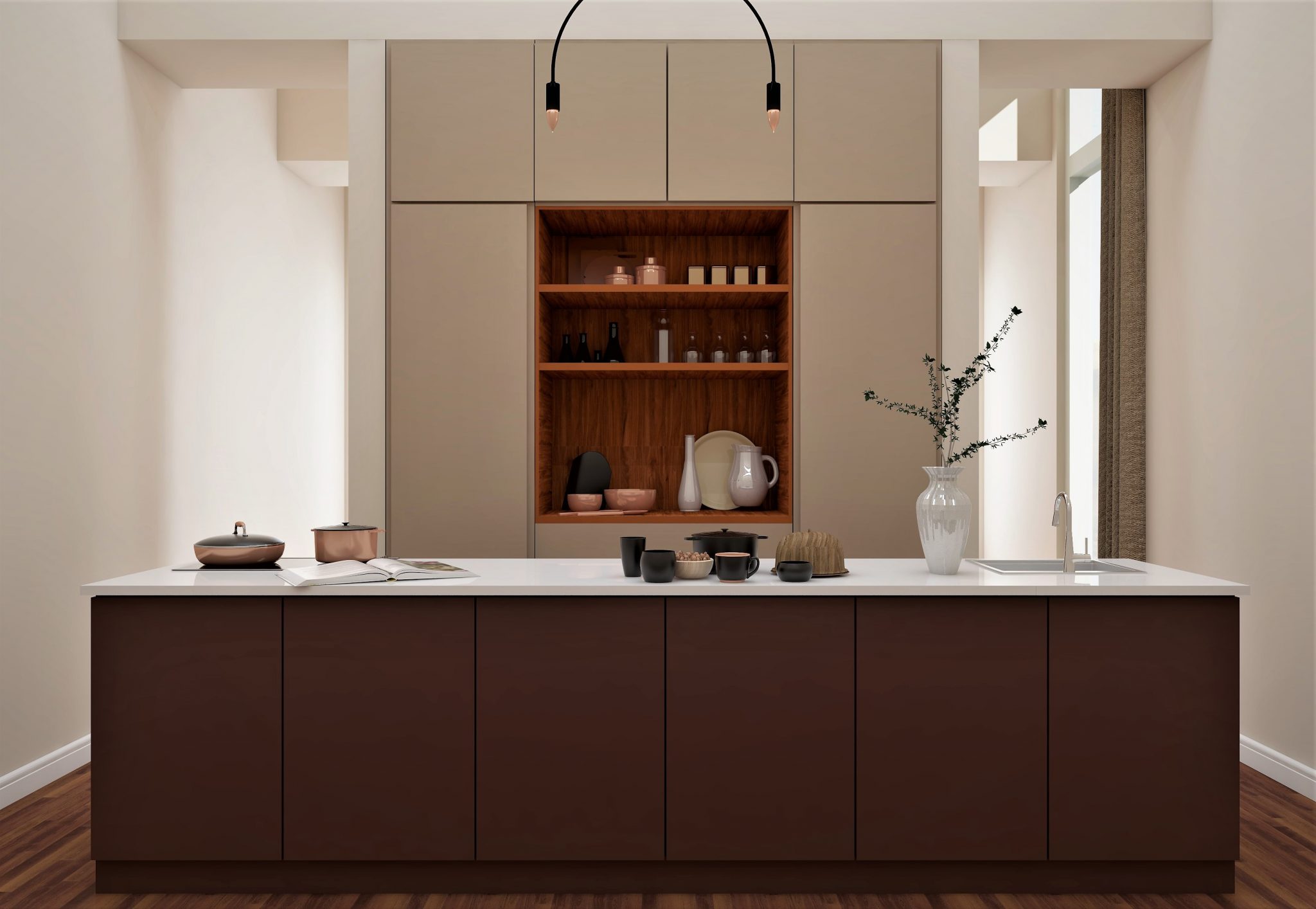 The Average Kitchen Size for All Types of Homes

The average size of an American kitchen has greatly improved thanks to the modern designs and cultures. The evolution from the miniature kitchens has been remarkable and it has been characterized by the degree of opulence, style and historical design norms.

Large, luxury homes have tended to have large kitchens either attached or separate from the home. Another factor is regional or demographical factors. For example, suburban homes tend to have larger kitchens than urban homes. Homes on the Southwest side of America have a tendency of having bigger kitchen designs than the ones on the North East side.

In the USA kitchens are used for diverse purposes other than cooking, and food preparations, they are used for dining with guests and friends. The children also sit on the kitchen islands as they do their assignments and bond with their parents.

Read also – How To Design A Kitchen? The kitchen was smaller than today and it occupied a smaller portion of the home. Appliances including stoves were huge and free standing and occupied most of the spaces. Food storage was done in a separate pantry area while the kitchen was a largely hidden space. The only exception was in the rural kitchen farms where the large space was used for serving meals.

The sizes of the kitchen floor plans improved to 2600 square feet. The kitchen sizes presently have increased to serve social functions. In-built industrial homes have larger dining spaces and open spaces for entertainment. Old homes have been remodeled to incorporate more spaces.

Kitchens that are 400 square feet or larger are quite common in larger homes. The kitchen area is now part of the open-concept design blurring the distinction between the kitchen and the living room.

The average size of a kitchen room is presumed to be 150 square feet. However other factors would determine the size such as the size of the family, and whether you would need to entertain them on a regular basis would translate to a bigger space and an open floor plan.

Read also – What is Kitchen Triangle?

The Average Kitchen Size in a Standard Home

The average size of a kitchen is dependent on the home’s age and there types of remodeling done. However, diverse statistics have been provided by the National Kitchen and Bath Association (NKBA).

According to the National Association of Homes (NAHB), the average kitchen sizes are proportionate to the overall printout of the home. Homes below 2000 square feet have kitchens with sizes ranging from 195 square feet. 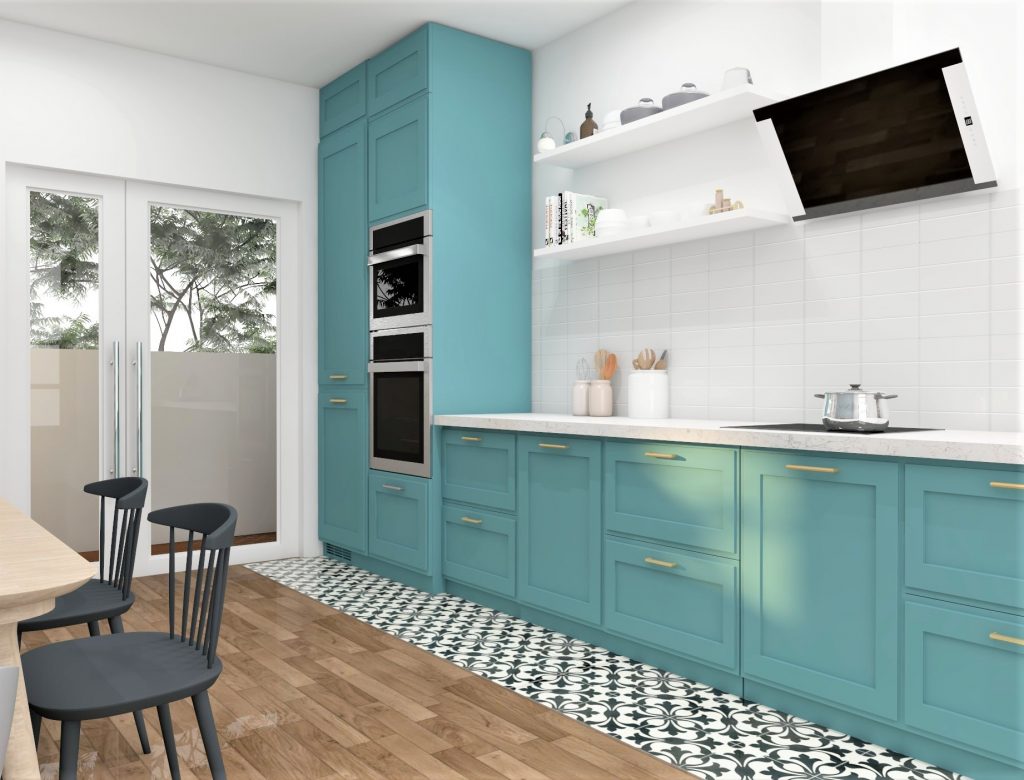 Trailer homes tend to have the same size as standard homes but are slightly smaller. Trailer houses are long and narrow. A standard trailer house is sized 20x 80. Smaller mobile homes are about 14x 70. The common characteristic of trailer homes is their propensity for eat-in-kitchens. The Average Kitchen Size in a Motor Home

The statistics in 2018 stated about 1 million Americans live in motorhomes. It is difficult to estimate the RVs kitchen sizes as the kitchen, dining room bedroom and living room share the same space. The kitchen area will tend to be next to the living room. It’s calculated in cubic feet to ascertain the appliances fit perfectly. Most of the appliances are made for recreational vehicles. 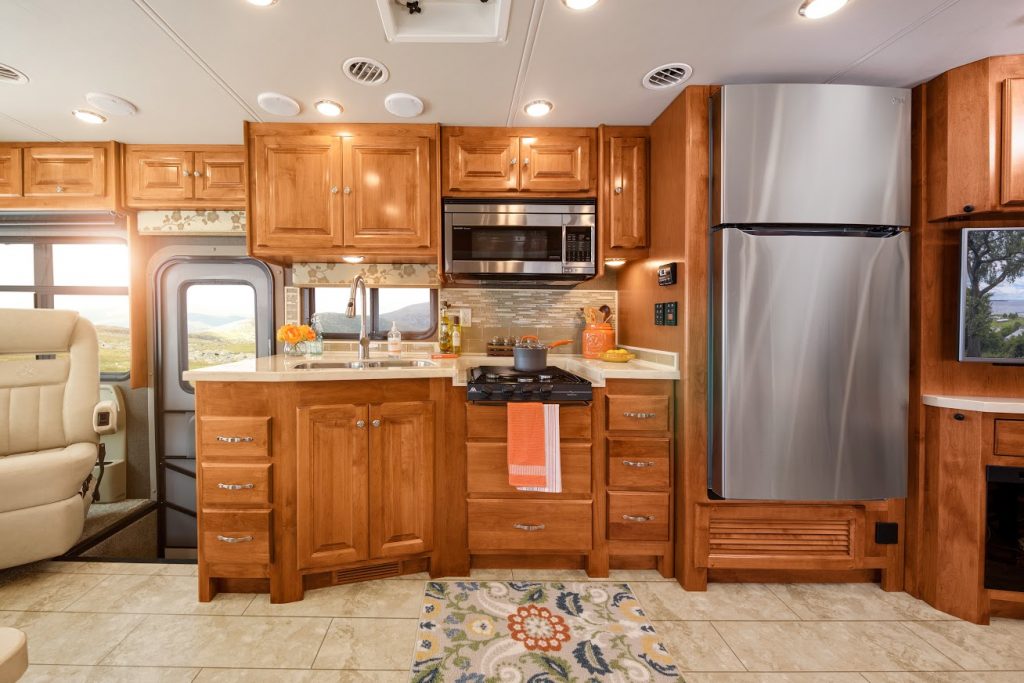 The Average Kitchen Size in a Farmhouse The Average Kitchen Size in an Apartment

A standard kitchen apartment has five kitchen layouts (G-shape, U-Shape, L-Shape, Galley and One Wall). Every kitchen is distinct and consumes around the same amount of space on average. Apartments are normally smaller than the standard house. Thus, their kitchens are also smaller. Most kitchens are under 100square feet. This layout type is suitable for small houses or limited kitchen spaces. All the kitchen cabinets and appliances are fitted on one wall including the kitchen island. One walled kitchen needs about 8 feet in length to accommodate all the appliances. 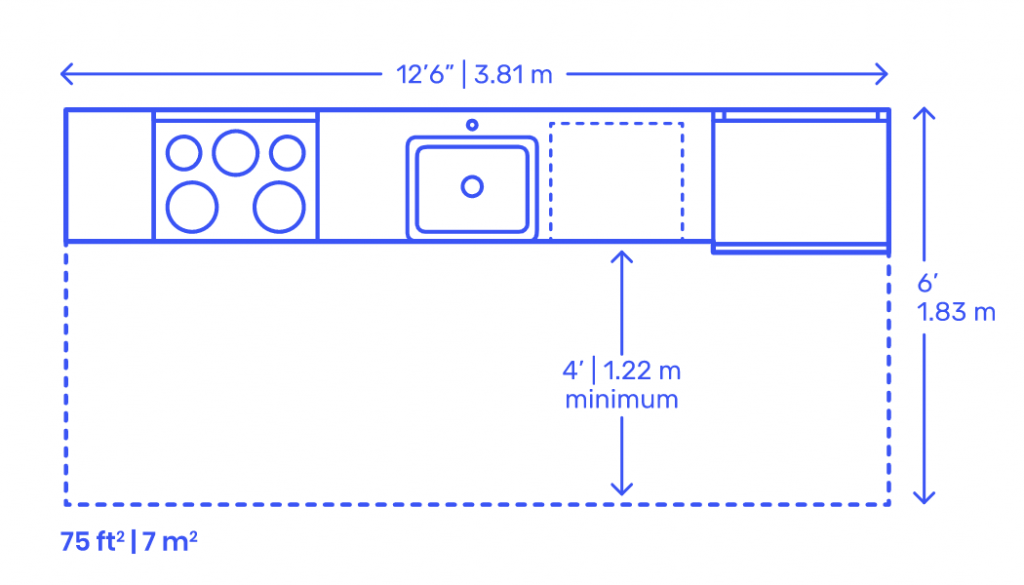 It is also known as a walk-through kitchen and is suitable for small kitchen spaces. In a galley kitchen, two parallel walls of kitchen cabinets and worktop spaces face one another creating a walkaway between one another.

A galley kitchen omits the issue of corner cabinets which can be expensive as they have to be customed. An average gallery kitchen is about 7 to 12 feet in width with four or five feet between the two walls of kitchen cabinets and fixed appliances. It consists of two perpendicular walls of kitchen appliances and cabinets. The average size ranges from 8 to 13 feet in length and 3 to 9 feet in width. The layout is efficient as it is easy to add a dining set or multiple workspaces. A U shaped or a horseshoe kitchen has a kitchen island and is best for variant cooking. It permits more spaces for movement in and out of the kitchen. It consumes about 107 square feet of space. 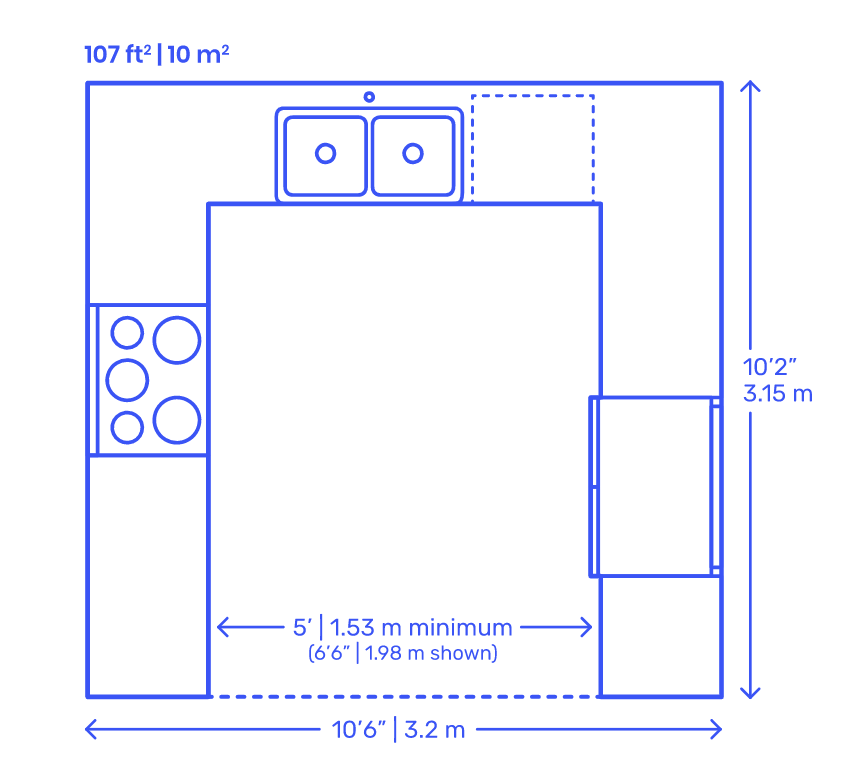 It is similar to a U shaped kitchen or a kitchen with an island. However, the third wall of the horseshoe shape is not fitted with kitchen cabinets or compared to the kitchen with an island as the island is connected making a peninsula instead of a free-standing kitchen island. The dimension of the peninsula kitchen is similar to a horseshoe-shaped kitchen. It comprises a large free-standing structure that adds an extra workstation. It can be used as a place to dine, kitchen sink or food storage. An average kitchen island is 3 by 6.5 feet. 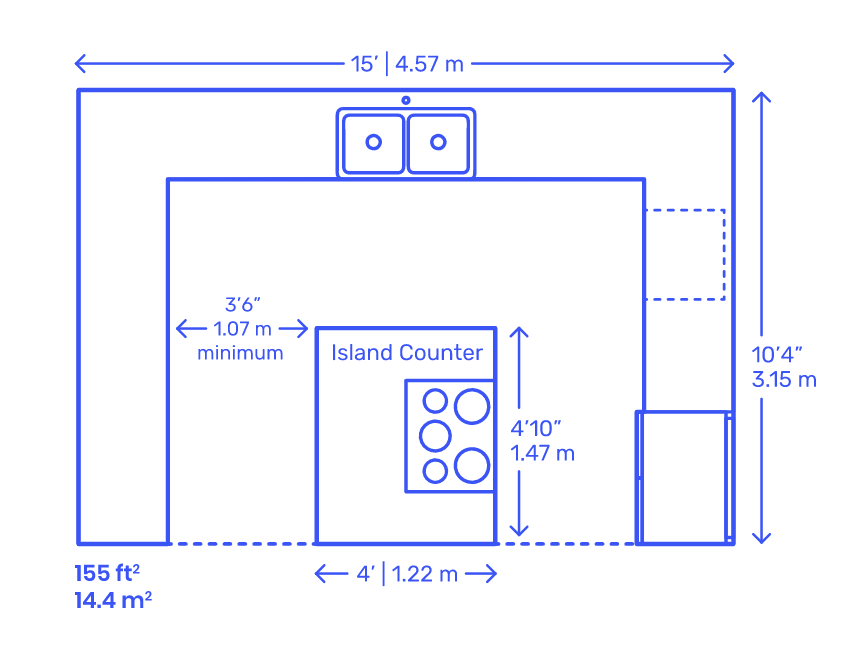 The Average Kitchen Size in a Tiny House

Tiny houses are in two categories. Those under 100 square feet and tiny houses under a wheel that is generally smaller than 200square feet. In an average house 10-155 of the house is consumed by the kitchen.

In a tiny home, the space is larger for the kitchen and is usually only one bedroom. If the tiny house is a small house, the ratio is similar to a regular house and everything is downsized equally. However, a tiny house on wheels has a different layout from a normal house. Every home appliance has a different size than it consumes. The fridge for example is divided into different types (The bottom freezer, top freezer, French door and side by side). The bottom freezer has a freezer at the base with an average size of about 29 1/2 inches to 32 3/4 in width and 67 to 70 inches in height and 33 3/8 inches in depth.

The French door has two doors on the top and the lower freezer. The freezer is 29 3/8 to 34 5/8 inches in depth. The side by side has two doors. One side is the freezer while the other is the fridge.

When one has a different cooking top and a built-in oven, the spacing will be different. A stovetop is normally placed inside a cutout countertop. A stove is 30 inches by 24 inches. Sometimes, they are smaller by an inch on the sides to ensure they fit on the countertop without overlapping.

3. Dimensions for an Ergonomic Kitchen

The dimensions of the size of your kitchen are based on convenience and comfort. A kitchen is suitable to work in and fits the physical stature. The critical details to check include the height of the stove should be comfortable for the back. The elbows should be four inches higher than the kitchen countertop.

It is a food prep area. It’s different from a virtual kitchen and it’s easy for individuals to confuse the two. A ghost kitchen does not require mortar and brick for home improvement. Thus, saves resources and maximizes the space.

Cost of Remodeling a Kitchen

Remodeling will depend on the size of the space and the style that one wants. 10X 10 square feet size of the kitchen may cost about $15,000 to $ 30,000. The benchmark remodeling pricing is about 5 to 15% of one’s asset values. A professional designer can charge about $100 to $1000 depending on their level of experience and the amount of kitchen remodel work to be done.

When remodeling a kitchen, you can decide to add space, change the countertop to a marble one or purchase a new appliance.

Proper lighting is essential for food preparation. It also sets the right mood and a perfect ambience for the kitchen. Different lighting fixtures can be installed in a new home for more insulation such as pendant lighting, wall fixtures and scones. It also depends on the types of kitchens and the average home size.

Kitchen wares can be stored in the closets, shelves and snuggeries. It’s also essential to isolate a space for dry foods. Shelves and closets will bear further distance and bone can maximize the space by incorporating fresh overhead closets and shelves. The sole purpose is to reduce clutter for a polished appeal.

Effective kitchen flooring should include safer and lighter accoutrements as they make the spaces commodious. It’s also effective as it’s easier to spot food tumbles. The effective flooring types that one can use include vinyl, Demitasse pipe, linoleum and hardwood. Vinyl and Linoleum are effective as they’re water-resistant and are available in different designs. Demitasse is effective in continuity and beauty.

To fight the smells spreading to the living room area it’s effective in installing a top-notch hood and large windows for proper rotation.

Read also – Standard Bathtub Dimensions For Every Type of Tub

The NKBA report states that USA kitchens have an average size of 161 square bases and the average kitchen sizes are largest in West South Central and mid-Atlantic regions.

The average kitchen size is about 13 by 13 bases and there’s a significant difference grounded on home style with a single-story home kitchen about 151 bases versus 174 bases for multi-levelled homes. Still, the average size is adding with houses of floor space 3000 to 3999 square bases having kitchen ranging from 191 square bases.

When you are renovating your beautiful kitchen and dreading the transitional factor, consider incorporating your favorite style into a modern home or vice versa. It is essential to consider your house size and your kitchen space before making major remodels

When in doubt about choosing your design elements, we suggest you turn to the user-friendly Foyr Neo software that is designed to help kitchen and bath designers, homeowners and interior designers alike. You can select your preferred floor plans, choose the paint colors for the walls, pick your furniture, and basically design your kitchen on a 3D model. It will give you an accurate rendering of what your kitchen design is going to look like after the makeover. 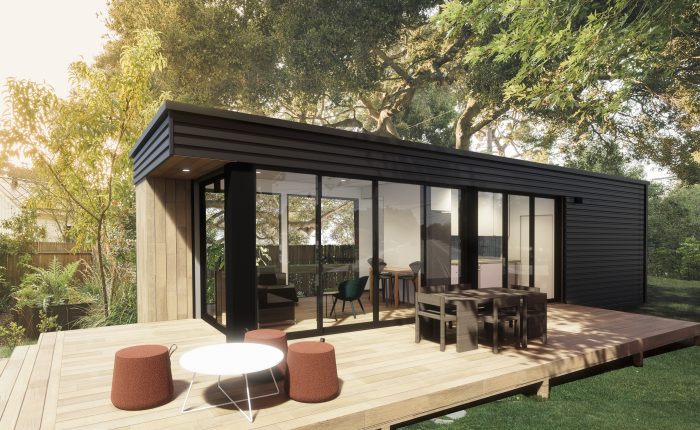 10 Benefits of Hiring an Interior Designer 20 Most Popular Types of House Styles and Homes